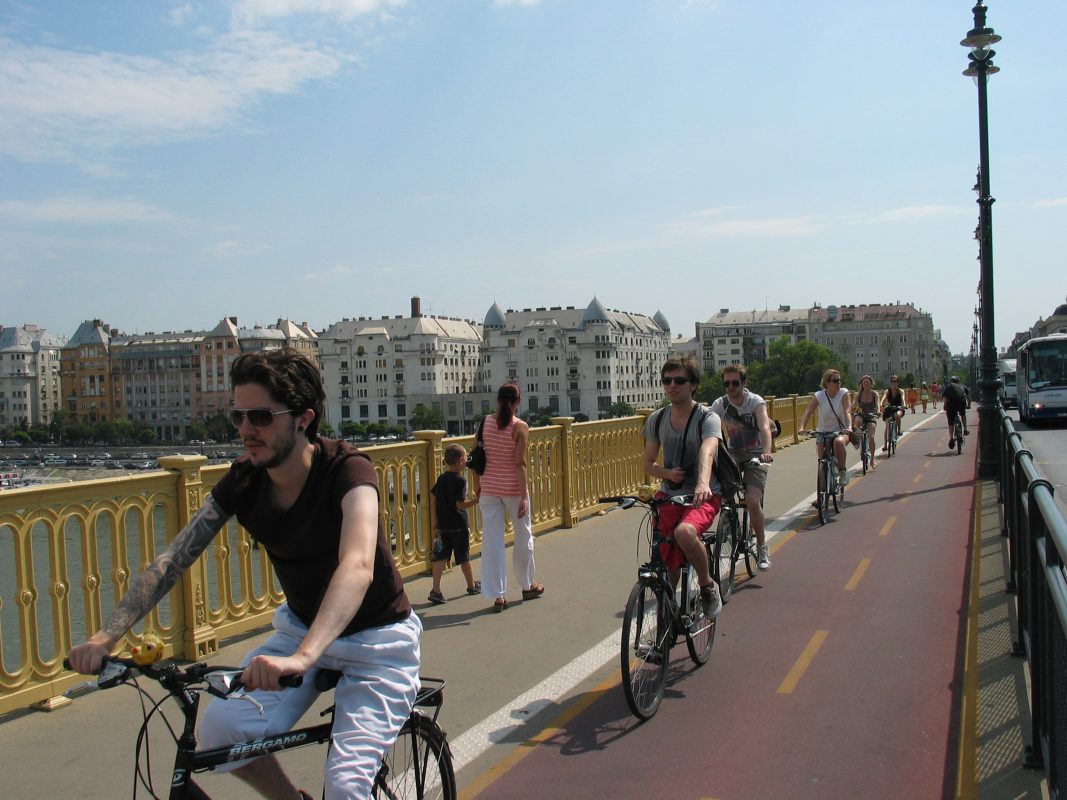 Riding on Margaret bridge to the island

Budapest has about 200 km of bike routes/paths/lanes. The international EuroVelo Nr.6 bike route crosses the city along the Danube river. In the recent years bike culture is flourishing and every spring more and more people gets on a bike, making biking in Budapest the most fashionable way of transportation.

Fortunately with the increasing number of bicyclists, car drivers are getting used to this type of traffic and increasingly respecting bikers. It is also possible to ride on the roads with the cars but that is only recommended for more experienced bikers and we avoid that on our tours.

Do not be surprised on the strange bike routes created on sidewalks which are also used by pedestrians. Be careful when riding on such. Funnily it is forbidden to use other sidewalks which are not assigned to cycling but this is not really enforced.

Typical bike lane in Budapest, detached from the sidewalk, often has some rail or poles between the pedestrian and bike side of the sidewalk. The advantage is that the bike traffic is more separated from the car traffic. 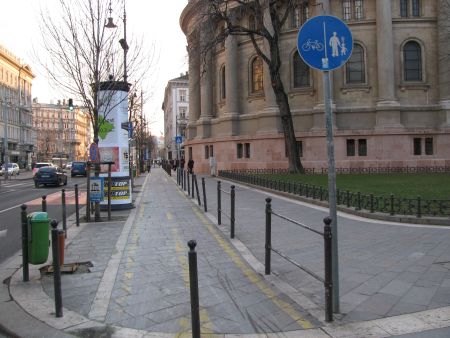 The handicap is that pedestrians often wonder around on the bike lane and cars turning from the main road to the side streets do not have a good sight of the bikers. Always watch out of the turning cars if you are riding on such lane. 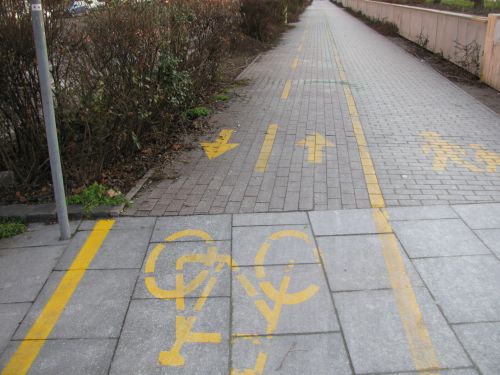 On this photo there is another example of this bike lane type. You can be sure that pedetrains will be around on the bike side as well. 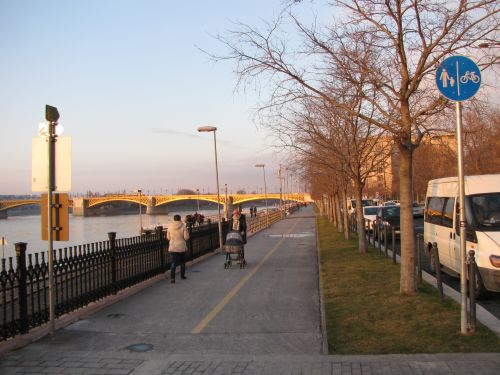 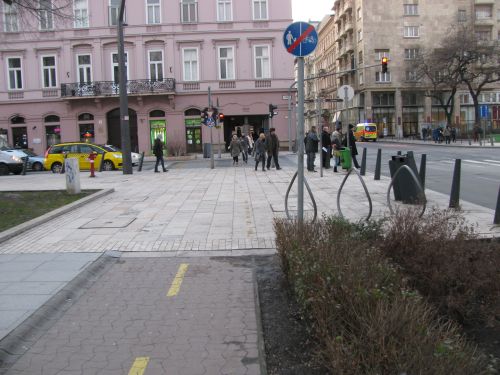 Patchwork of bike lanes in Budapest. Bike lane ends here without any continuation.

Recent bike lane type in Budapest, bike riders are allowed to ride in the bus lane. The advantage is that bikers are more visible for car drivers. The downside is that bus drivers are not very happy about the new idea that they have to share their lane.
Watch out! Not on all bus lanes it is allowed to ride a bike. 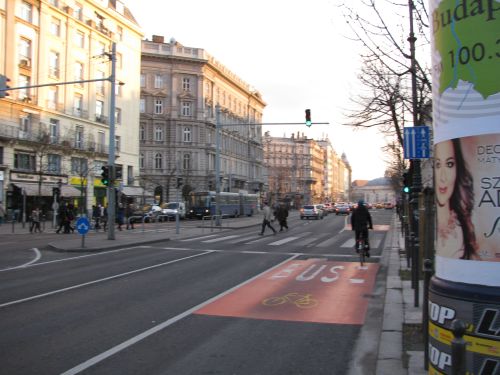 Bike lane on the side of the road:

Our favorite bike lane type and also considered the safest. Bikers are visible for car drivers, the bike lane is well separated and marked. This one is the fastest and best bike lane, Andrassy avanue has this type, too. 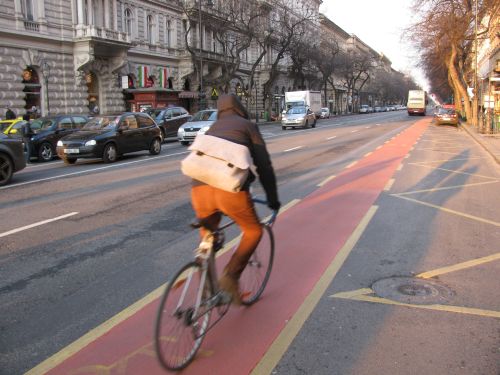 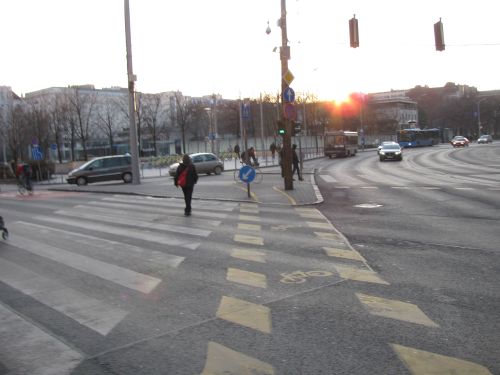 Bike lane crossings are also marked on the roads.

Roads shared by cars and bikers:

There is only a bike sign painted on the road in this case. In many cases bike riders are allowed to ride the wrong way in a one way street. Actually in front of the Parliament traffic is not allowed for cars, so it is very neat to ride around. 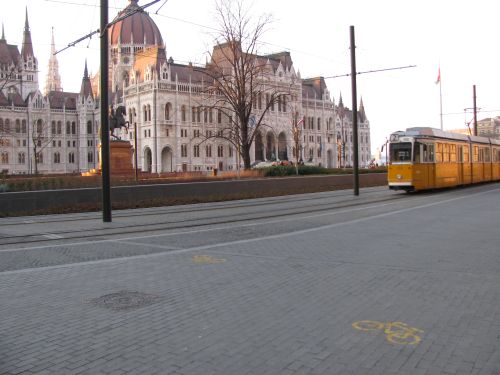 OUR FAVORITE BIKE ROUTES IN BUDAPEST:

This recently developed bike route follows the river all the way from the south of Buda to the north of Buda between Rakoczi bridge and Arpad bridge. This is the most scenic bike route in Budapest with a great view to the Castle hill, House of Parliament, Chain bridge and the center, Danube bank of Pest.

At night you get a breath-taking view with all this under lights. This bike route is actually part of the Eurovelo No.6 bike route that starts from France and arrives to the Black sea.

From the center to Margaret island bike route

You will see some fabulous building on the way out from the center like St. Stephan’s basilica, House of Parliament and arrive to Margaret bridge. From the bridge’s new bike path it is easy to get to Margaret island and ride around. Nicest at springtime.

There is a quite spread out forest in Budapest with hills 300 – 500 meters high and some good quality roads and dirt roads. Janos hill has a look-out tower with great view to Budapest. This requires a little more fitness than the city bike routes, but worth it for the experience. There are many different route possibilities, best to start around Szell Kalman ter and head to the hills.

OTHER BIKE ROUTES IN BUDAPEST

This map includes all assigned bike routes in Budapest, not all of them are separated bike lanes. Some of the bike lanes in Budapest are on a sidewalk, so you will have to cycle beside pedestrians.

THE EUROVELO BIKE ROUTE IN BUDAPEST

The Eurovelo bike route system is a Eurowide network of bike routes. The number 6. route is from the Atlantic to the Black sea with a 3653 km distance. It follows the Danube river for hundreds of kilometers and crosses Budapest.

It is an amazingly scenic ride from Budapest to Szentendre, our Szentendre bike & boat tour mainly follows the Eurovelo 6. route. 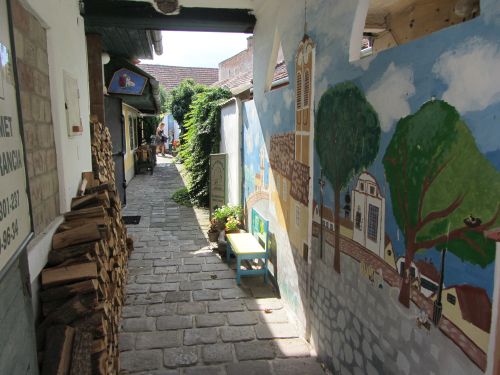 DANUBE BIKE ROUTE ON PEST SIDE

An other scenic bike route is on the Pest side of the Danube. You can ride all the way to the Slovakian border to Szob. It partly uses the regular roads and partly a built bike path. Coming back to Budapest by train is an option.This route passes the beautiful landscape of the Danube bend, see Visegrád, lush mountains, islands and pretty towns.

Request a private tour for this ride – send us email to bpbikebreeze@gmail.com

Bubi (Budapest Bicycle) was launched in March 2014. The aim is to provide a “green” way of transportation, to get from A to B, so it is not really for sightseeing but of course that is possible, too. Stations are supposed to be at 300-600 m distance away from each other in the center.

Use of the bikes is free up to 30 min, after 30 min of use you start paying extra fees.